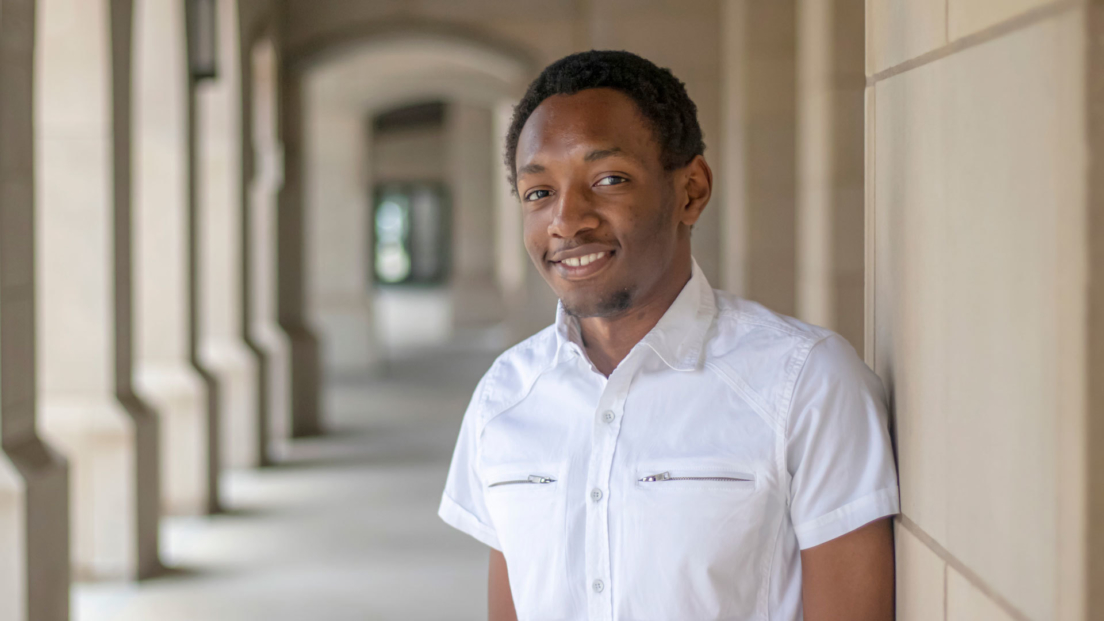 Caleb Mangesho, a child of immigrants from East Africa, is 17 years old. He and his family have been part of the Tulsa International Fellowship (TIF) for 12 years. TIF has been a close-knit family for Caleb, and today, he gladly gives back to his community, oftentimes manning the camera for the livestreaming of weekend services.

At age six, Caleb first explored writing. Unlike most books he had read about tornadoes that shared about their destructive nature, he felt compelled to share about the beauty of tornadoes. When he told his dad he really wanted to turn his writings and illustrations into a book, his dad took him to the print shop to print and bind.

In middle school, Caleb ventured into poetry. He discovered that free style is his favorite to write. He entered several poetry contests and won each time.

In ninth grade, he wrote a series of poems called “Confessions.” The first of which won first place in the Tulsa Library’s 2019 Young People’s Creative Writing Contest.

Caleb believes poetry is written prayer. He feels his poetry is very personal and used to struggle with sharing it. One day, a teacher encouraged him with a quote by Carl Rogers, “What is most personal is most universal.” Since then, he has learned the value of sharing with others.

“There is wonder in the ordinary things of life, and poetry is a way to eloquently communicate that.”
– Caleb Mangesho

This poem about the pandemic reflects many of the emotions he experienced: fear of becoming ill, the loneliness of isolation, and an unspoken desire to be safe. At the time, he felt he needed to bury his feelings since everyone was already so burdened. When he decided to write the poem, he felt it was the emotional release he needed and wrote an entire collection.

Caleb believes that there is wonder in the ordinary things of life, and that poetry is a way to eloquently communicate that. To him, communicating this way is important because it is in this wonder that we find a comfort and a way forward through the challenges of life. In his own words, poetry “… can seem confusing or impractical. But poetry is basically communication of the wonder of the things humans are gifted in this life.”

A song of authenticity
by Caleb Mangesho

In the evening, I often wrote of another place—
Of one to God, of one not tainted by fear, or the
Unmeasurable pain associated with the unknown:

‘I lift up my eyes to the mountains—
Where does my help come from?’

I wrote of a warm world.
That world as many others were prayers to God.
Stark and soft. Full of blinding light:

‘My help comes from the Lord,
the Maker of heaven and earth.’

Then I’d go out into the day— and expect the
Same clarity. But like the words of the psalm,
Life came as the sun and the meaning of the words:

‘He will not let my foot slip—
he who watches over me will not slumber;’

Fell off the horizon, the sun leaving me in the day
To ponder the overwhelming intensity of faces.
Fearing randomness and isolation:

‘indeed, he who watches over Israel
will neither slumber nor sleep.’

I write to find comfort, to find the truth, to find an end
To this human race, that has hope in it too;
A song of authenticity:

‘The Lord watches over me—
the Lord is my shade at my right hand;’

Yet my future arcs, and crushes the night.
And the moon is an overwhelming threat to my
Existence— see the irrationality:

‘the sun will not harm me by day,
nor the moon by night.’

‘The Lord will keep me from all harm—
he will watch over my life;’

Full of paranoia and dead hours.
I wait to be reborn the next day.
And I pray:

‘the Lord will watch over my coming and going
both now and forevermore.’

And I move on.

The Spirit of Quarantine: Part I

I dissect my soul in shards,
And as I examine the desert of fortitude,
That collapses my happiness into
That region of space, in which time ceases
And the heart is infinitely condensed,
The only thing that is left is the silence.

Silence— is a cliff, a bridge into free fall
Into that transient dimension that only lasts
For a moment, and then moves on—
It is the spectacular awe of nothing.

I start in the middle of this pandemic
Shuffle, floating around the lightbulb, like
A baffled fly, shy, my voice tinged
With a musical sound, believing in the
Most improbable of beliefs— A modern
Job— how could this happen to me?

To be quarantined without question, the elation
Left me, I descended down into the pit
Where words collide like empathy sunken,
Head lowered, like a tree that is supposed
To grow another ring, but always stationary,
Filled and haunted by the majesty of days, fleeting
Fleeting away. When I write down an emotion,

I also pray— that whatever it is, GOD doesn’t
Lead it to sag by the wayside, like a broken hip
A strained knee without rest, legs that long to run, but
Always forced to walk. And every time my mind
Becomes distant specks in the darkness that I
Struggle to hold on to, they twinkle and spin—

They descend and if by some miracle of the Holy Ghost
Ascend into those heavenly realms that limited vocabulary
Could never control— it’d scorch them into ashes,
Ashes— O GOD, why after years of universe
In my mind, my heart, my soul— Why do I feel so
Utterly alone? My breath has fallen off the cliff of

Silence as if there’s nothing left— And yet there’s
Much to do. Detach, detach, I’m through, through—
Two is always better than one— toil foils boils the
One— I wonder if trying to be two, neglected
Me all those years ago as if I was trying to
Nurture a selfishness, delve deep into that
Heart of mine and find divine a God to use
To my device? I, which is the one that ceased to exist,

Because of me, always wondering what I myself would
Do. And when you look at a person, and you’re lonely
One can’t help but be filled with wonder, yes the
Sad bewilderment of GOD, that looks at a person
Perceives them in dismantling frames. In the moment,
One is a monument; lost then found, one then another one—

I, floating in space— it took a pandemic
To awaken the dead of this place, to flip—
And suspend the boringness that we need to live.
Love is boring, I believe, it ought to shed
Some kind of connection somewhere. To someone sitting in a chair?

Isn’t it fair how words don’t get to make sense together,
Because a person never really makes sense altogether— and
To acknowledge the challenge to knowledge is already
Unnerving. Now Isolate, so that what’s in part fades
Away. And what are they? A dream drifting with a body?
Death that does not die? Or a life moving in reverse,

Like a people-mover in one of those big airports that
People use to go somewhere. GOD, where is the
Sun, the heart of someone, eyes constantly sinking in air
Inherently meaningless to them, carried only by the
Quiet desperation of an obliging brain. Where’s
The spirit? Gone, insane, suppressed, surprised, in demise,

At the corner of your eye and nose, that living slope
Filled with air that points ahead of you to go
Somewhere. I used to think a story was a destination
That goes somewhere, reaches the end of the
Week and reboots on repeat. But stories—
They are too heavy— that’s why they have to be shared—

I don’t know where— but here is a good place to
Start— since as long as you’re alive— the ending
Is not there— yes it is nowhere to be
Found, so how do we reconcile the next generation

With our thoughts— unfleshed-out bodies, rivers
Without water, stout, bombs that shout inside of us
But we never have the courage to let out? GOD
What can I say? What can I say? This pandemic is
Making me pray. Today corners tomorrow, with
Sorrows never laid to rest in yesterday—

In years of the people that no longer I see—
Gone in a dream of the moment. Which contradicts
Because often a dream is exactly where they reappear.
There they are unborn, backward, as the opposite of opposite,
And yet never the same. Like a future already drowned
By shame. Or a present that became fake in the

Sound of your name, your name trying to hold on
To that cracked picture frame constantly colliding
In darkness— yes darkness— sight is that illusion
That makes us think that we know better cause we
Can see— No, there’s weariness in seeing and
Believing— stretching the bones artificially to say I
Am tall enough to contain height and be condoned—

Condone, commend, comfort, condemn, a conscience clear,
To contend that bright and frightful hour that you find
Yourself in the labyrinth of words— a science which
People fail to understand because it refuses to be constant,

So it changes and then, in the end, one can
finally, see it and heart and mind and distance between it,
Reached, connected as one can finally behold
Even in a pandemic: that to know yourself, evidently,
You must recognize the present.