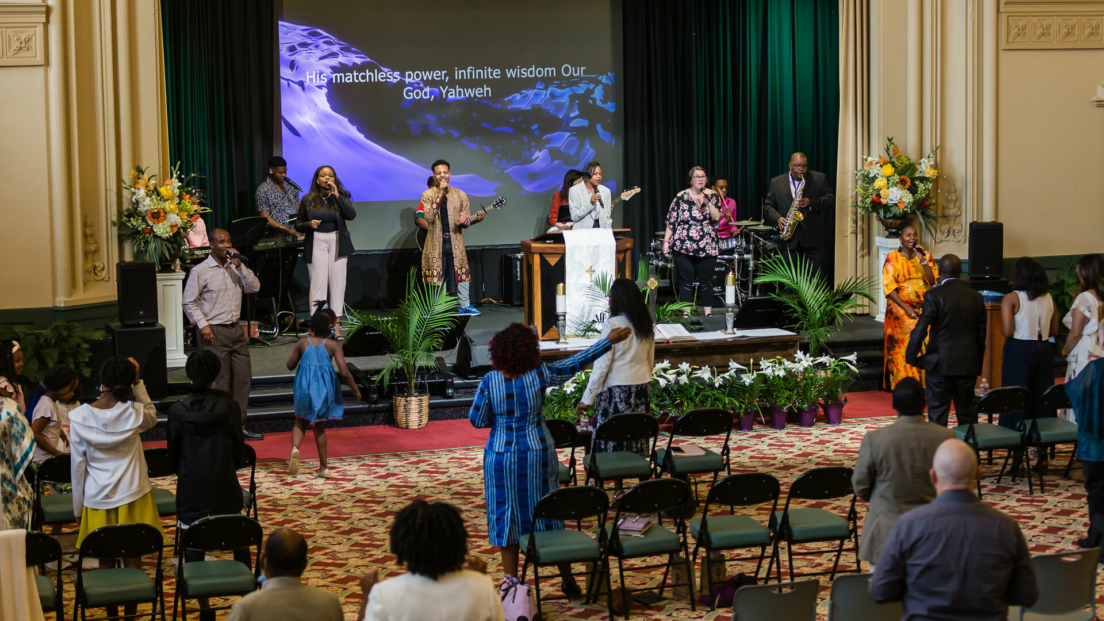 If you’re unfamiliar with the story of Tulsa International Fellowship (TIF) Music Ministry’s recent sowing, growth and fruition, you might be surprised to learn how under the aegis of Tulsa’s first organized church, an entirely new worship team has formed in the last 15 years, growing from a single keyboard, keyboardist and vocalist in 2009 to a full praise band with multiple rotating instrumentalists, vocalists and leaders today.

Called by Pastor Wambugu at TIF’s inception, Allan Kanyeki was the worship team’s first lead vocalist. Kanyeki remembers training with the keyboardist, Brenda Chemngorem, to practice singing in various keys: “She would play the keys, and then say, ‘Okay sing this.’ And I was off. I didn’t know how to listen to a key.” On the first day that Kanyeki was scheduled to perform, he skipped the service, feeling unprepared. Afterward, he remembered how he had learned to lead audiences as a rapper, and this gave him the confidence to lead worship.

In the early days of the music ministry’s formation, several musicians came and went, including Chemngorem. At the same time, a consistent group of members was forming, led by Antonette Simmons. An organized and disciplined leader, Simmons was well-suited to prepare the budding music ministry for its calling. Kanyeki describes Simmons as “strict … really strict,” and current worship team leader, Solomon Tsuma, adds, “She was strict, but it was for a reason. She really pushed us to step out of our comfort zone. We worked through every detail. It really developed our skills.”

In 2014, shortly after Simmons took over leadership of TIF’s music ministry, there was an influx of ORU students, including Tsuma, who was introduced to Simmons at his first TIF service. When she learned he played the keyboard and drums, she asked him to play. Impressed with his gifts, she invited him to practice the next Saturday, and he led a song in worship the following Sunday.

With the experience and talents that Allen, Tsuma and many others brought, TIF’s music ministry formed a full band. Under Simmons’s disciplined leadership, they honed their musical abilities and formed a tight bond with one another in faith. Kanyeki elaborates, “People really bonded … and out of that, two weddings happened. They have been the solid people that stayed.” After Simmons married and left the congregation, Pastor Wambugu called Kanyeki to assume directorship of the team. Uneasy in this role at first, Kanyeki quickly found confidence in his abilities to organize people and encourage them to work together.

The first test of Kanyeki’s leadership came during the period of transition following Simmons’s departure. As he states, “I’m soft, I’m easy on people, so the beginning was rough. Some people would come, and they were serious, coming to do choir and some people were playful. These guys were college students. There was no control. There was tension, good tension.” By speaking with the serious and playful groups first separately and then together, he reconciled them, encouraging empathy, individual responsibility and teamwork.

When Kanyeki returned to Kenya for six months in 2016, he was concerned about who would lead the worship team. However, the team of leaders that had formed alongside him and under his direction had no problem stepping up to manage the ministry. Since his return to Tulsa, Kanyeki has no longer considered himself director of the music ministry, and leadership is now shared amongst the team.

In addition to raising up leaders, the worship team has provided a way to practice for many young musicians who have basic skills. TIF Music Ministry leadership works with the broader First Church’s music ministry to support the church’s youth praise band, motivating and providing a venue for the next generation of worship leaders. Kanyeki’s son, Ian Kanyeki, learned to play the drums, joined the youth praise band, and is now in the rotation to serve as drummer during the TIF worship service. With so many capable musicians, members can rotate which weeks they serve, and there is now more time to reflect on a service’s message during Saturday practices.

After such phenomenal growth, the worship team’s struggle is now finding the right pace to learn and add new songs to worship.

As a mark of their growth into a team of confident, skilled musicians, they played three new songs in a recent service. Tsuma states, “It used to be when we had a new song, we’d ask ‘can we do this?’” Recently, however, “We did three new songs, and it went seamlessly.” Yet when performing new songs, the team must focus more on the unfamiliar music and the congregants may not be as capable of connecting with the music as when singing something more familiar. Tsuma adds, “that’s the challenge of new songs, you really tend to lose out on the congregation joining in in worship … when I am seeing them having a hard time with this song, I think, ‘Why did I pick this song?’ It draws the focus away from what makes worship what it is and what makes it special.” Kanyeki and Tsuma’s goal for TIF’s music ministry is now to balance the team’s enthusiasm for growing their musical gifts with new songs and the desire of congregants to rejoice in these gifts to God’s glory.

Solomon Tsuma joined TIF Music Ministry in 2014, and since then he has served as a drummer, keyboardist, bass player, guitar player and vocalist. He fondly recalls a recent service when the congregation joined in singing faithfully a medley of “Great is Thy Faithfulness,” “’Tis so Sweet to Trust in Jesus,” and “It is Well with My Soul.”

Spurgeon Wambugu has been a member of TIF Music Ministry since 2009. He has served the ministry through media, sound engineering, and leading worship. Spurgeon finds joy in seeing the youth’s passion to serve in the music and media ministry as he did at a young age.

About the author:
Nick McMillan joined First Church in June 2021. He enjoys teaching and leading small groups discussions for high school Sunday school and is a frequent participant in the “Before the Rooster Crows” Bible study. He is grateful for this opportunity to work with and learn more about Tulsa International Fellowship's phenomenal team of music ministry leaders.