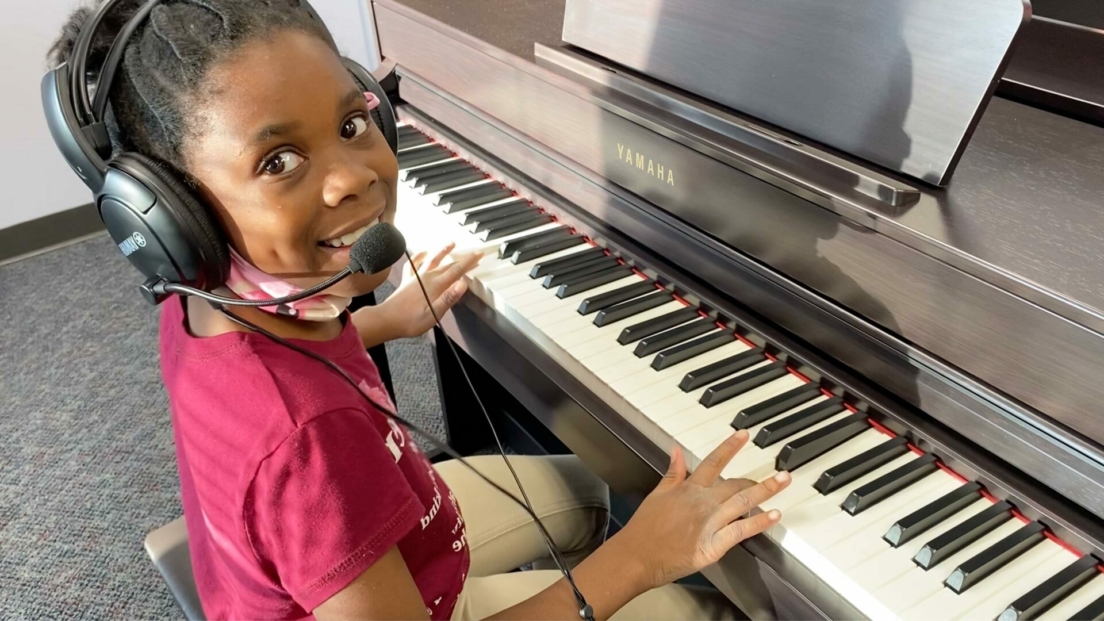 It was a creative work, this dream of theirs, as in the early stages of Masterwork Academy, Jenette McEntire and Duff Points began considering all that might be possible. Yes, a piano lab would be marvelous because of the many ways it builds skills. This would take time … some years, in fact. But on Thursday, October 28, 2021, Masterwork’s Green Group, comprised chiefly of third graders, made their way into a world where dreams come true.

“It was a delight watching them enter the room for the first time,” Jenette exclaimed, her face beaming. (Okay, we were having a phone conversation, but I know her face was beaming!)

In addition to all the financial planning and physical details involved in realizing this dream, engaging just the right music teacher was paramount. In 2018, the Lord brought classically trained, recently retired Geri Stites to Masterwork’s door. Geri has taught music to elementary school children for 32 years. Though initially unsure about returning to a world of work, Geri was most excited about the prospect of doing sacred music in a public forum. She found the combination of faith and fine arts, encouragement to teach music straight out of scripture and room to follow promptings from the Holy Spirit impossible to resist.

Geri had no trouble catching the piano lab vision. She has been eager to see the dream come to fruition and was recently trained by Saied Music on the technical aspects of the digital pianos that were purchased. “We have seven instruments/music stations that can accommodate six students and one teacher.” Geri explained that she will be teaching group lessons to Masterwork students who are old enough to respect the instrument.

“They learn so quickly and it gives them such a sense of accomplishment.”
– Geri Stites

Geri is hopeful that the children will be able to build a repertoire of praise songs, including duets and quartets. “They learn so quickly and it gives them such a sense of accomplishment,” she stated. Inspiring them to pursue music beyond their days at Masterwork Academy is also a goal of the program. Geri is currently working on a music curriculum that can permanently remain with Masterwork.

As Jenette and Duff began sharing their dream, I don’t know if they used the exact same words that Joseph declared to his brothers in Genesis, but no matter. Like Joseph’s rise to power and being positioned to aid his family and an entire nation, so the dream of a piano lab that can excite, inspire and reveal creative mysteries has come to Masterwork Academy.

I’m betting the children will quickly find the button for loud clashing cymbals, and to that we say, “Amen!”