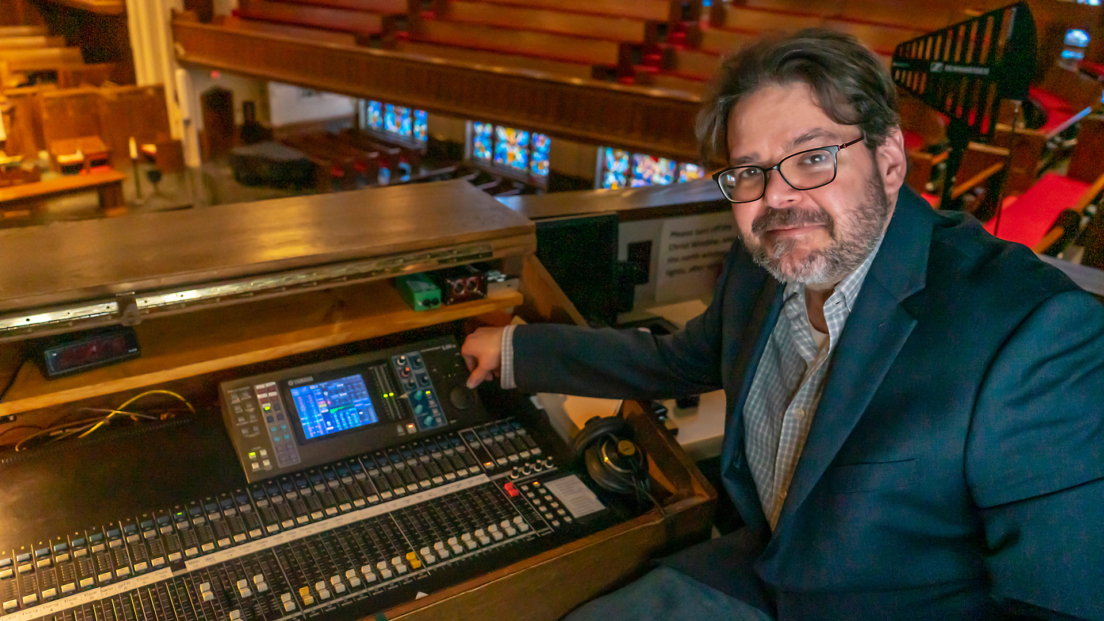 June 2022 (Tidings magazine) - In 1964, a new sound came to America when the Beatles landed in New York. Around the same time, a new sound came to the Sanctuary here at First Church in the form of amplified sound. The Moyers commemorative lanterns were hung in the Sanctuary with the speakers for the new sound system. Though fill speakers in and under the balcony were eventually added, as well as the broadcast portion of the system, various pieces have come and gone, but the infrastructure and backbone of that sound system have remained the same since that era. Until now.

Though it has been discussed for years, this past year the Worship and Music Committee took up the banner of bringing the Sanctuary sound system into the digital era. Thanks to the efforts of many including Dr. Jim Miller, Mary Anne Marberry, Ron Pearson, and Audio/Visual Manager Michael Vickery, a plan was made and funding secured. After exploring several options, local audio experts, TES, were chosen to do the sourcing and installation.

Though we had hoped the project would be completed in August of 2021, due to all the issues with shipping and the international chip shortage, we encountered a variety of delays. But, in early January, the new speakers and mix rack (the brain of the sound system) were installed. Though this is only a part of the coming changes, already the difference is profound. I first had the experience of singing and playing guitar through them in a service at the Ash Wednesday service. It was amazing! My voice sounded like my voice. I could hear my guitar in the house, and I could use the microphone as one should. During the sound check for that service, Ron kept walking around and commenting on just how amazingly even and clear the sound was no matter what part of the Sanctuary he was standing in. Hopefully you’ve noticed the differences as well. The pastors can now be heard well no matter where you sit.

As I write this story, we are awaiting the arrival of the two new soundboards (one for broadcast and one for front of house) and the stage boxes. The new stage boxes will allow us to move from a total of eight inputs from the chancel up to 104. We can mic an orchestra, a choir or whatever. It’s a huge jump in capacity. And, indeed “capacity” is probably the right word for the vision for this project. Mike Vickery says, “The new system will allow us to deliver a better listening experience for those here in person and those viewing remotely. Another major factor will be the ability to adjust to the ever-evolving needs of the worship ministry.”

The goal for this project was not simply to replace something old or even to enable the things we are doing now, though those were certainly important aspects of this project, but to have in place a sound system that will be an enabling factor for creative ministry with the many ideas that come from our leadership team. The sound of First Church has been improved for years to come.

About the author:
Eric Baird has been the contemporary worship leader here at First Church since September of 2014. He came to First Church after having served as a missionary in Galway, Ireland, for three years. He graduated in 2003 with a bachelor’s in Cross Cultural Services from John Brown University where he also minored in music.