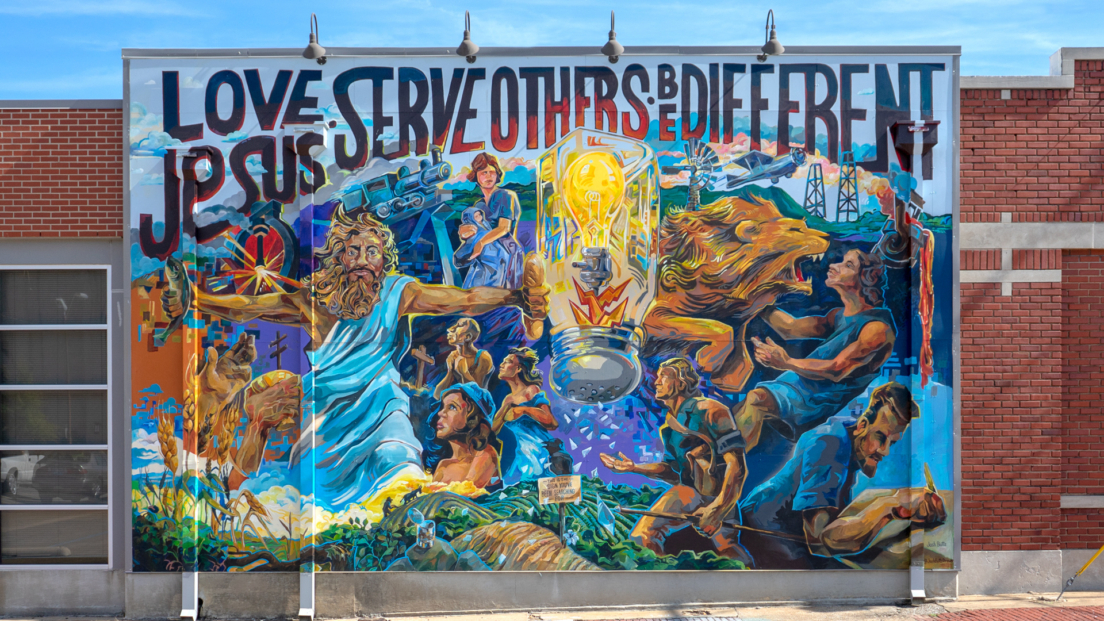 Working with muralist Josh Butts is like being in a creative think tank. His love of art, art history, location and sentiment are encouraging, optimis

tic and relevant. Josh first began his proposal for this site-specific mural on the west side of the Powerhouse building by studying the work of Thomas Hart Benton whose large-scale murals in the 1930s for the WPA are considered the most important murals ever executed in the United States. For Tulsans, Tomas Hart Benton is known as a Regionalist whose artwork has been exhibited at Philbrook Museum, Gilcrease Museum, and The University of Tulsa. Benton’s work often featured fluid figures of everyday people doing everyday activities. Mr. Butt’s mural for First Church captures the essence of Benton’s work and creates murals that are current in his contemporary use of a public urban exterior surface as his context.

His strong, active and flowing figures dominate his painting. They depict many common Biblical stories such as The Parable of the Sower and Daniel in the Lion’s Den. The image of Jesus as the central figure is a nod to another Regionalist painting, that of John Steuart Curry’s “Tragic Prelude.” Mr. Butts artfully uses this image to reference Jesus and the feeding of 5,000 with loaves of bread and fish.

Initially I loved the surprise of the saltshaker. I thought why? I began to think of scriptures, what does it mean to be a pillar of salt? To be Lot’s wife? Are we preserving our sins? Could we freeze our current perspective, and would it be one of God? Maybe, it simply means we need to shake up our lives and be on the path with God. Or maybe we are to be salt and light to the world? Mathew 5:13-15.

The message is for the viewer to discern.

Finally, Mr. Butts is playful. We see signs of his humor in this mural. Another example is his small sign with the wording, “This is the sign you’ve been searching for.” His work challenges one to look for signs in his work and the signs within our daily lives. Maybe these signs are to remind us to be outwardly focused and inwardly God centered. Enjoy your search for meaning and enjoyment in this exciting new mural which combines words and images to send a message there is plenty for all, to serve and to be different.