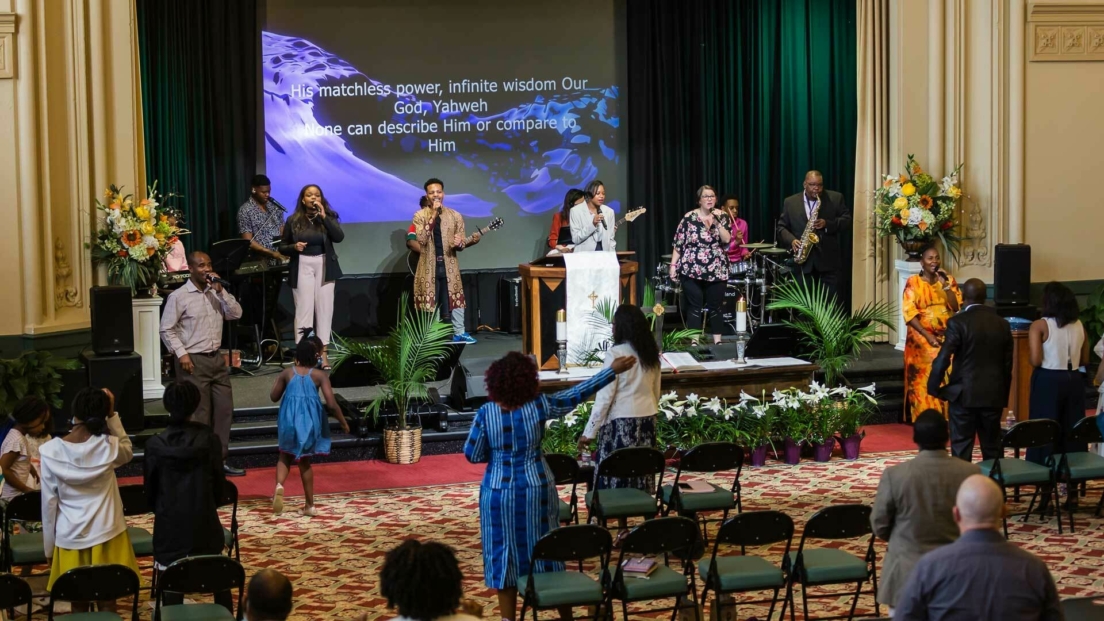 One of the great joys of working and worshiping at First Church is the community within our body known as Tulsa International Fellowship (TIF). TIF is a vibrant community of immigrants within the larger family of First Presbyterian Church. This active community is captained by Rev. Wambugu Gachungi. If you have attended First Church for a while you know this. What you may not know is that one of Wambugu’s many talents is cultivating, enabling, and providing opportunity for gifted volunteers to step into leadership roles in TIF and the larger First Church community. For this article I was very blessed to interview three of these dedicated volunteer leaders.

I began my talk with Elisa Mangesho by asking, “Who is Elisa?” He smiled and said, “A simple guy from Tanzania. A husband and a father to three talented children who loves Jesus with all his heart.” Keep in mind that this simple man helps run his wife’s incredible Petra Kids Ministry in Uganda and his son will be attending Yale University on a full academic scholarship. “My biggest desire is for people to experience God, not just know about Him. Every day I ask that I could do that better as it begins with me.”

“When people come, we want them to not only receive but to take Jesus out into the world.”
– Elisa Mangesho

Elisa first became active with TIF in 2011. He is now an elder and serves in a variety of roles including the TIF leadership team, worship and music committee, and outreach team. He is also the head of the TIF media ministry and streams worship services around the world.

He is incredibly grateful for the way TIF has invested in his family’s life, particularly that of his children. Elisa’s vision for First Church is to see us as a congregation walking in the “fullness of God.” I asked him to explain further, and he said “When people are here, they will have been changed for having encountered God and being more in love with Him. When people come, we want them to not only receive but to take Jesus out into the world.” Inwardly strong and outwardly focused.

Patrick Kirunda is originally from Campala, Uganda. His father was a police officer and his mother a schoolteacher. Both died when he was young. His mother was killed by a lone shooter and his heart-broken father drank himself to death. Patrick then grew up in the care of an uncle and his grandmother. His grandmother was a “born-again Christian evangelist,” who gave Patrick his first Bible and introduced him to Jesus. His first job out of high school was with a youth ministry leading retreats and preaching.

In 2006, Patrick signed up for a diversity exchange program which was essentially a green card lottery and was selected to come to the U.S. What happened next is nothing short of a miracle. In a dream, an angel told him to move to Tulsa and not New York, as was his original plan. He had never heard of Tulsa and told his pastor about the dream. The pastor just happened to have friends in Tulsa and asked them to host Patrick. He soon got a job as a custodian at ORU and then enrolled as a student and graduated with a bachelor’s degree in Ministry and Leadership.

“I encourage our congregation to visit TIF and experience what it is like to worship in a place where people look and worship differently than what they may be used to.”
– Patrick Kirunda

Patrick met Wambugu in 2010 at a worship service when Patrick was preaching. At the time, Patrick was leading Victory’s Africa Fellowship. In 2012, after much prayer, the Lord led Patrick to begin attending TIF. Soon after Wambugu began giving him “responsibilities.” First, he became a part of the TIF leadership team and then he began to preach on occasion. He is now an elder on session and substitutes for Wambugu in leadership and preaching when he is out of town. When asked what he would like to share with church members, he said “I encourage our congregation to visit TIF and experience what it is like to worship in a place where people look and worship differently than what they may be used to.”

Grace Masaku is originally from Nairobi, Kenya, and came to Tulsa to get her masters in Christian Counseling in 2004. She first met Pastor Wambugu through a friend who had come to know him after overhearing him speak Swahili in a store. Both she and her husband, Urbanas, were founding members of TIF in 2010.

“God loves and uses all different kinds of styles and traditions. We are different, yet one.”
– Grace Masaku

Grace is an active member of the TIF advisory group and prayer team, and she is an integral part of the TIF worship team, having formerly been the administrator of that group. She has also served as an elder on session and on the TIF leadership team. Though she does not carry a leadership title with the worship team, she is very much a leader and mentor both musically and personally. Wambugu also invites her to preach at TIF services several times a year.

She is grateful for how the TIF community has helped her to grow both spiritually and individually. Grace says of Wambugu, “He has a way of drawing gifts out of people and all that I’ve done in TIF is because he has called for me.” I asked if there was anything she would like the larger First Church community to know about TIF and she said, “One thing I’ve learned with TIF and First Church, is the experience of the global church and how God loves and uses all different kinds of styles and traditions. We are different, yet one.” Who is Grace Masaku? “A lover of Jesus and His people. A wife, mom, sister and administrator who tries to do much good in the community.”

TIF worship services are held Sundays at 11 a.m. in the Great Hall in the Bernsen Community Life building. Their services are also streamed to Facebook.com/FirstChurchTulsa.