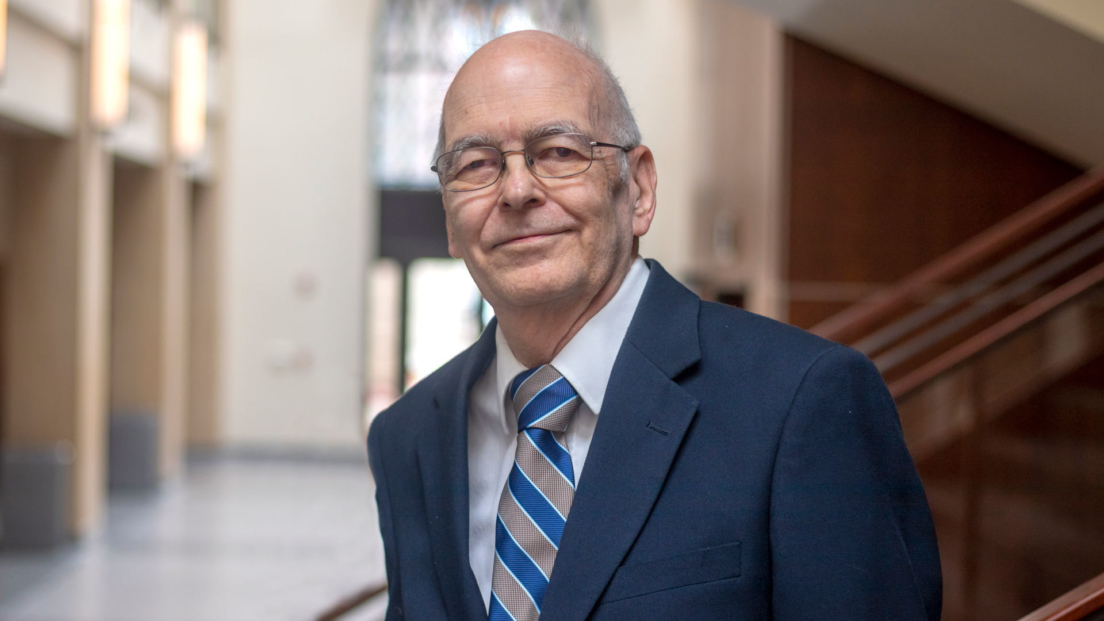 Heard but not seen

A long time ago, in a balcony not so far away, a new hope was dawning. Thirteen-year-old Michael Vickery was asked to help with the audio in First Church’s two morning worship services. Alas, the young man needed transportation to and from Church each Sunday. The Lord was faithful to provide and his father, Gene, agreed to ensure his son was on time each Lord’s day.

Gene sat patiently through every service, watching as his son grew in knowledge and experience at the audio board. It was evident Michael had inherited some of his father’s God-given talent and instinct in the area of electronics.

Gene Vickery had long been fascinated with the inner workings of all things electronic. As a child of 4 or 5, he would go to the store with his father and desire nothing more than for his father to buy him yet another extension cord to take apart. Gene says he loved taking things apart and if he was able to put them back together, he only did it so he could have the chance to take them apart again!

In addition to electronics, Gene also adored chemistry, graduating from The University of Tulsa with a BA, BS and BC. Gene and his wife, Annette, married in June 1971 and he ultimately spent many years working as a laboratory chemist for a downtown Tulsa refinery while Annette taught school. Soon after the couple married, they began their search for a Church home. Both knew they wanted to live out their lives together serving the Lord and each was quite happy when the Lord led them to First Presbyterian Church of Tulsa.

Time began its march as the couple was busy rearing their boys, Phillip and Michael. At First Church, they attended the Forum Sunday School class and Annette worked with the children’s choirs and hand bells. Gene ultimately became very involved in the audio side of things at Church.

Richard Halliburton had noticed Gene sitting with Michael near the audio booth each Sunday and invited him to begin helping with memorial services, weddings, etc. Gene had an extremely flexible schedule at work, so he was usually able to get away with even short notice of an event, which was a tremendous help to Church staff. Michael’s studies and life pursuits eventually made it impossible for him to continue the work on Sunday mornings. Gene stepped in to take his place.

“The audio board is fairly complex and Gene was very good at it,” says Doug Crain. “Gene was always the first responder if there were issues. He kept things running. He could always fix the old equipment and it would run better than the new!” Doug also explained that for a number of years Gene never missed a service. “Throughout Gene’s entire tenure, it was unusual for him to be absent even one or two services each year.” Doug mentioned Gene’s humility, citing a more recent incident when Dr. Miller was invited to attend a Gideon meeting and was surprised to find Gene Vickery at that same meeting. Gene had been serving as a Gideon for years and had never mentioned it.

In addition to Gene’s Gideon work in the community, he is a member of the American Theater Organ Society, Tulsa Chapter, helping them keep their pipe organ in good repair. Ron Pearson tells a story that demonstrates how this also benefited First Church, “A small electronic part in the Chapel organ chamber was malfunctioning. I called Gene for advice and he had that very part in his inventory. He quickly came and fixed the organ. Gene is a servant of the Church who has always gone out of his way to be helpful and do his best while trying to stay behind the scenes.”

“Without Gene’s contribution, the service would come to a halt, yet he never wanted the credit.”
– Ron Pearson

Michael Vickery added, “My dad is very resourceful and understands how things operate on a very basic level. With him around, we always had a backup for the backup. He knew how to stretch what we had on hand and he made it work well for a very long time. He is a good steward of everything he’s ever done.”

Gene has relished taking a number of First Church lads under his wing. In addition to his son, there was Scott Marberry, Brett Crain, Justin Pickerel and Jack Grossman. Michael observed that his father was a good role model and mentor to these apprentices and they enjoyed learning from him. Scott Marberry offered this reflection, “Gene Vickery gave me my first real job. I apprenticed with him in the audio booth at First Church through my high school years. He taught me many details about the sound system. He was quiet, respectful, reliable and patient. The time through high school is a pivotal moment for the trajectory of an individual’s livelihood. I was fortunate to experience Gene’s guiding presence as he opened my ears to sound.”

Much of Gene’s efforts incorporate his interest in tiny things. This trait coincides with his attention to details surrounding how he treats others. Joan Hoar says, “He does what he can to accommodate. As a liturgist, he was certain to have a step stool in place if you were going to need it on Sunday mornings.” It’s the little things that mean a lot.

Gene is quick to help folks with their electronic needs away from the Church as well. When he learned recently that Sherye Halliburton was having major difficulty getting her TV and computer set up in her new home, he was quick to offer his services. Sherye was a long-time friend of and First Church co-laborer with Gene’s wife, Annette. They all attended the same Sunday School class until Annette passed in 2012. Though initially Annette had to coax Gene into participating, he has continued attending and says he “absolutely loves” his class!

Sherye noted that Gene always felt audio was a calling. “He is extremely responsible and a kind, gentle, faithful Christian. He is dedicated and does everything to the best of his ability. He cares very deeply.”

A favorite aspect of Gene’s duties has been the opportunity it presented to meet the special guests/speakers. When asked about challenges, he stated, “We have over 50 speakers in the Sanctuary. Adjusting the volume throughout in an attempt to please everyone is definitely challenging. The next is trying to disappear.”

“I only wanted folks to hear the sound, not see me.”
– Gene Vickery

Our brother has obviously lived out Proverbs 27:2: “Let another praise you, and not your own mouth.” (NRSV)

For 30 years, Gene Vickery served diligently, quietly and faithfully. His final service at the audio board took place Christmas Eve 2019. He will tell you that he has basically lived to help with First Church’s worship services and that “fixing things” is a genuine ministry for him. “I find repair work very rewarding and I’m always pleased to find someone who can benefit from my services. I just want to continue ‘fixing things’ for the Lord.”

We are an appreciative congregation who wishes to thank Gene for his faithfulness. He has lived out Jesus’ unction in Matthew 6:4-6, “When you do something for someone else, don’t call attention to yourself. When you help someone out, don’t think about how it looks. Just do it — quietly and unobtrusively. That is the way your God, who conceived you in love, working behind the scenes, helps you out.” (MSG)