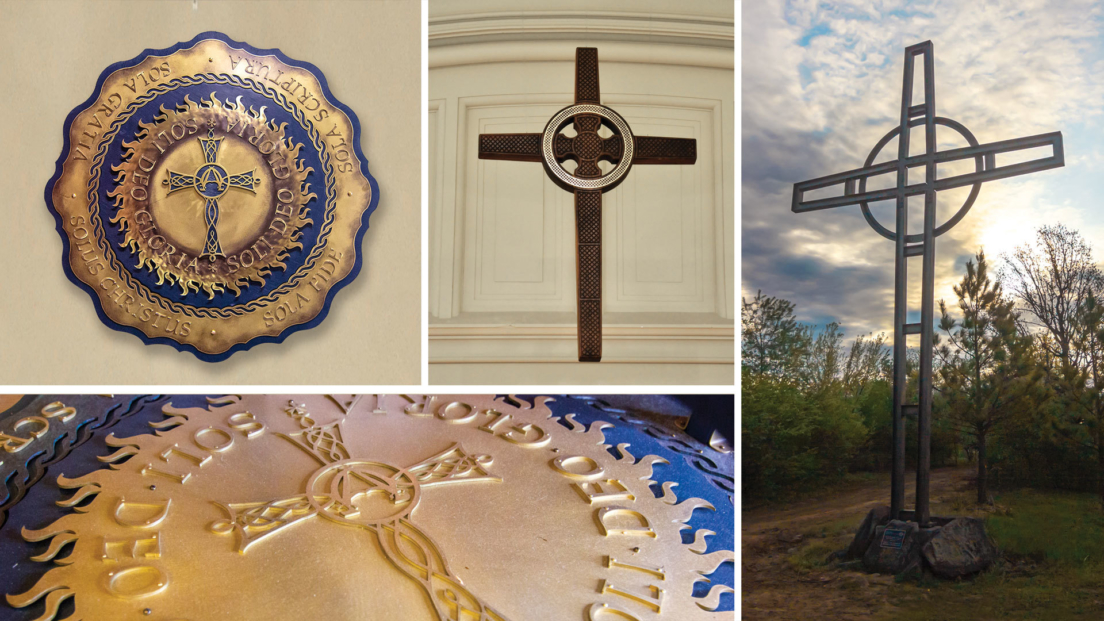 The crosses of Tim Clement

In 1960, when Tim Clement began taking communion, the artistic enclave called Little Bohemia thrived in the corridor that now funnels Broken Arrow traffic into downtown Tulsa. On his way to school, Tim would sneak a peek inside the art gallery of Barbara and Bob Bartholic. At 18th and Cincinnati, it was the nerve center of “The Boheme.” Bill Rabon, one of the habitués of the Bartholic Gallery, painted Tim’s house and got paid in art supplies.

About the time beatnik turned hippie, Tim enrolled at TU to study sculpture. For an elective, he took life drawing from no less than Alexandre Hogue. For a career that’s included four colleges, military service, separate short-ish stints as both a draftsman and firefighter, 20 years of teaching at the college level, and a partnership in an aerospace company, Tim shelved his inner Bohemian.

Then, in Easter 1999, in a sort of personal uprising, he went to Paxton Woods and bought a nice chunk of walnut. Using a waterjet cutter, he fashioned a cross for display in the Bernsen Great Hall, which had begun holding contemporary services there Super Bowl Sunday.

“It still had the secular feel of the Masonic Temple,” he said. “I thought, this room needs a cross.”

Hanging above the altar, strung on braided aircraft cable, it’s a Celtic cross, with the circle at the intersection, what Gaelic theologian John O’Donohue calls “the great circle of God … the largest embrace in the universe.”

Tim has crosses stationed in all corners of First Church, from the marvelous globe of the five solas in the Miller Library (to commemorate the quincentenary of the Reformation) to the 30-foot steel specimen at Camp Loughridge, located on a rise overlooking the basketball courts. He designed one of aluminum that went to Malawi in a suitcase.

Tim was giving back, in money, time and talent, what he’d been given.

“It was a turning point. Something was changing in me. I could hear the Holy Spirit: ‘Tim, I’ve been chasing you down for a long time.’ ”

“So, whether you eat or drink, or whatever you do, do all to the glory of God.”
– Paul’s first letter to the Corinthians

The pot was stirred in Larre Sloan’s 11:00 Bible Study, where Tim felt called to confess a previous life of hedging, compartmentalizing his two worlds, the spiritual world of Sunday and the problematic other. A.W. Tozer calls this the “sacred-secular antithesis,” a man-made construction that believers enact to rationalize behaviors. Tim nearly, and literally, rationalized himself to death.

Enter the Westminster Shorter Catechism, that and the descant voices rising above the choir in the contemporary praise and worship Tim had come to love. Of the former: “Man’s chief end is to glorify God, and to enjoy him forever.”

“I thought, what does that actually mean?” He’d wondered if the context had been edited out.

But hearing those voices resonate at a pitch above (“It’s an angelic touch”), Tim Clement found the passion he’d been missing, a verve to ignite the knowledge. “More heat than light,” he put it.

Ever since, he always asks, be it art or commerce or lunch or liturgy, or even upending a No. 2 seed Goliath in a South regional, “Did you do it for the honor and glory of God?”