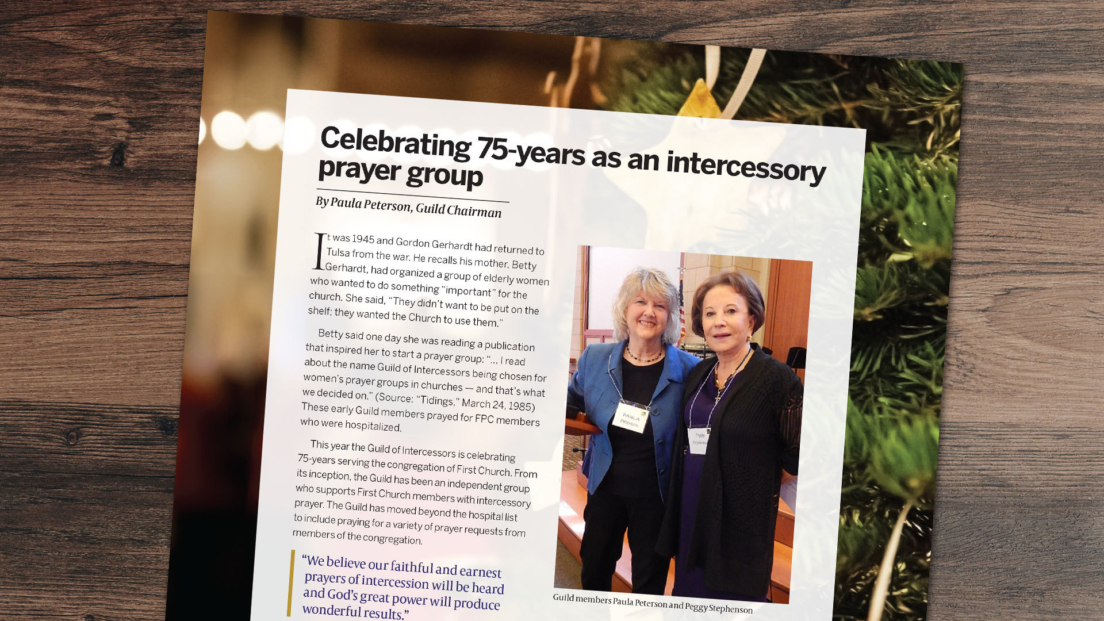 It was 1945 and Gordon Gerhardt had returned to Tulsa from the war. He recalls his mother, Betty Gerhardt, had organized a group of elderly women who wanted to do something “important” for the church. She said, “They didn’t want to be put on the shelf; they wanted the Church to use them.”

Betty said one day she was reading a publication that inspired her to start a prayer group: “… I read about the name Guild of Intercessors being chosen for women’s prayer groups in churches — and that’s what we decided on.” (Source: “Tidings,” March 24, 1985) These early Guild members prayed for FPC members who were hospitalized.

“We believe our faithful and earnest prayers of intercession will be heard and God’s great power will produce
wonderful results.”
– Paula Peterson

A list of prayer requests is sent to Guild members and the pastors every week. This Prayer Letter also includes inspirational devotions and essays, many of them written by Mark Peterson. The Guild has also expanded to include both men and women. We currently have over 70 members who faithfully pray daily for the needs of our congregation.

Guild members also pray daily for individuals on our cancer list, and also for active-duty military personnel who have a connection with First Church members. Monte Prater faithfully prepares and maintains these two lists. The Armed Forces list is distributed to the congregation

To assist the First Church community in understanding the value of prayer, the Guild also coordinates the annual Holy Week Prayer Vigil. Through participation in the vigil, participants are encouraged to spend quiet time with the Lord and come to appreciate the power of prayer.

Seventy-five years later, God is still calling us to pray for others. The Guild’s motto is “We are united hearts seeking the power of God.” We believe our faithful and earnest prayers of intercession will be heard and God’s great power will produce “wonderful results.” (James 5:16b NLT)

If you need prayer or you would like to for pray for others, please contact Paula Peterson at 918-296-5548.