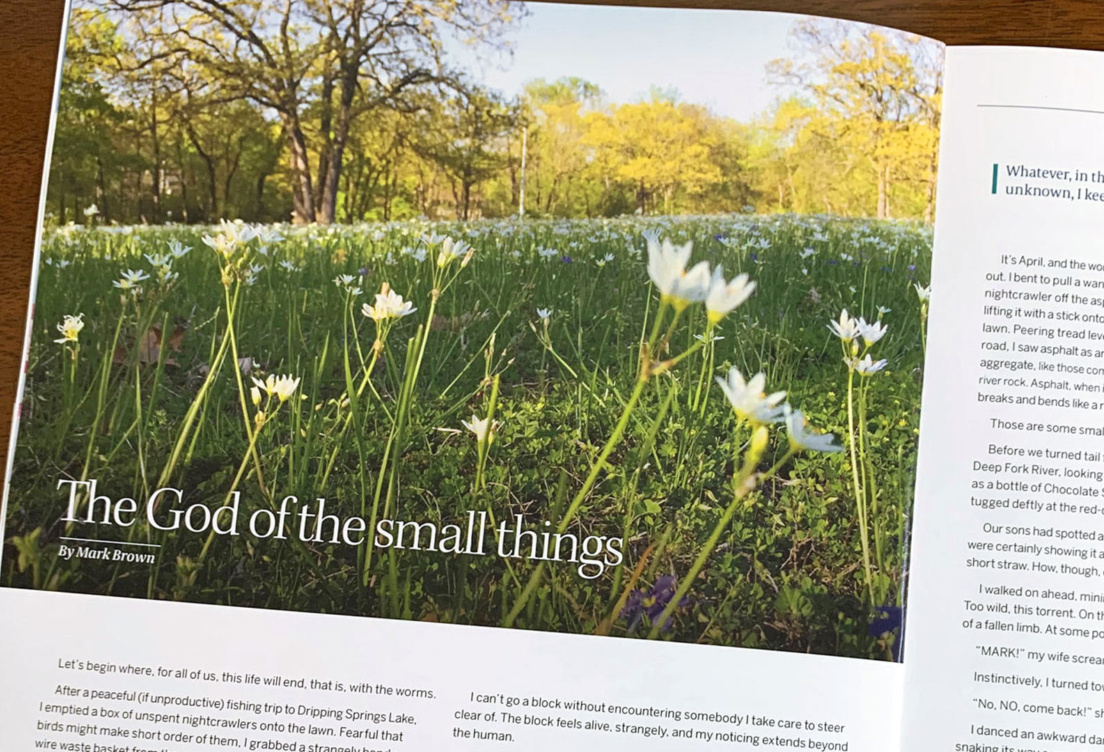 The God of the small things

Let’s begin where, for all of us, this life will end, that is, with the worms.

After a peaceful (if unproductive) fishing trip to Dripping Springs Lake, I emptied a box of unspent nightcrawlers onto the lawn. Fearful that birds might make short order of them, I grabbed a strangely handy wire waste basket from the garage and set it over the wriggling mound. Then I fell on my knees to watch.

Those segments of a worm are called annuli. They are marked by dozens of small bristles called setae, which allow the worm to not only move but nosedive into the packed earth. A worm seems, to the naked eye, incapable of nosing its way into soil, but seeing is believing. When I came back for my basket, they were gone.

Lately, I have been noticing things. Small things. I don’t know if it’s because I have the time or, borne of some intuition, the inclination. Whatever, in the bliss wrought by the treacherous unknown, I keep seeing God.

My neighborhood walks are more neighborly these days. I watch among the parked cars for the odd vanity plate, most of them so obscure only the owner knows the meaning. Where’s the vanity in that?

I can’t go a block without encountering somebody I take care to steer clear of. The block feels alive, strangely, and my noticing extends beyond the human.

The helicopter seeds that twirl from a maple, we now know, spin much like the vortex of a tornado. Bats, hummingbirds and insects employ the same physics when they flap their wings. Who’d a thunk?

I bent to pull a weed from a bloom of Star of Bethlehem flowering in Mudd Park 2, the name Google gives to the park near Carnegie elementary.

It felt, to me, out of place. I tugged and the weed would not give, not unlike the way an unripe peach will resist rash plucking.

Whatever, in the bliss wrought by the treacherous unknown, I keep seeing God.
– Mark Brown

It’s April, and the worms are out. I bent to pull a wandering nightcrawler off the asphalt, lifting it with a stick onto a fescue lawn. Peering tread level at the road, I saw asphalt as any another aggregate, like those composed of river rock. Asphalt, when it cracks, breaks and bends like a river.

Those are some small things.

Before we turned tail for Dripping Springs, we strolled a branch of the Deep Fork River, looking for a spot to wet a hook. The river ran milky brown as a bottle of Chocolate Soldier. Large driftwood angled in the current that tugged deftly at the red-clay banks.

Our sons had spotted a black snake of some sort and, while not taunting it, were certainly showing it attention. Snakes, ever since Eden, have drawn the short straw. How, though, do they differ from the other critters of creation?

I walked on ahead, mining the current for increasingly unlikely fishing holes. Too wild, this torrent. On the gravel road ahead of me were spread the shards of a fallen limb. At some point, I must have taken my eyes off the ball.

Instinctively, I turned toward her and lept unwittingly into harm’s way.

“No, NO, come back!” she said, beckoning wildly.

I danced an awkward dance and felt a grip in my chest. Behind me, snaking its way across the road a social-distance six feet between us, lay a very long, very thick cottonmouth. It seemed not to mind. We’re talking ball bat thick, tapering to the pitted head young Okies are trained to fear.

This instinctive dread … is this the legacy of Eve, who surely must have recoiled from the serpent at first sight? Has the fear of getting stung been handed down so long as that? Genesis talks of the serpent being crafty, which is believable enough, though craft is not the attribute I would give to the loaded beast ambling its way into the muck of Deep Fork.

Nor, I must confess, did I venture close enough to find any marvel in its design.